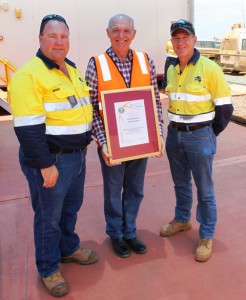 As the man responsible for the WH&S audit of high-profile miner Fortescue Metals Group Kevin York, CEO of Safety First, watched with satisfaction as Worksafe Commissioner, Lex McCulloch presented the rail arm of the NW WA-based mining company, TPI Rail, with a coveted Gold Certificate of Achievement Award for the implementation and ongoing monitoring of their successful Worksafe Plan for TPI Rail.

he award is based on assessment carried out by an Approved Worksafe External Assessor and was undertaken by Safety First’s Kevin York over a 4-5 day period in October 2013.

FMG’s Rail Operations Manager, Norm Kenny, accepted the award from the commissioner on FMG’s behalf at a ceremony held on January 23rd 2014 at TPI Rail’s Thomas Yard in South Hedland.

The award is part of an ongoing two-year process that began in 2012 when Kevin first began auditing the company’s WH&S Program.

GIO Happy To Pay Out The Safety First Performance Plan